Siberian shamans and Siberian clients know exactly what to expect from each other. Pretty much anything.

In the latter stages of my apprenticeship in Tuva, Southern Siberia, I had become used to the range of requests for help. As well as the usual more straightforward medical problems, there were many other things local people wanted us to address. 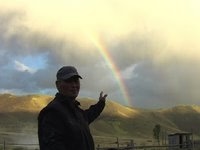 There are the seven and 49-day rituals when a relative has died. This initially involves contacting the spirit of the recently departed in order to see if there was some message they wanted passed on to their survivors. And during the 49-day ceremony the shaman escorts the spirit of the dead person to the other side.

On one occasion, the father of a friend of mine in Tuva died while I was here in the UK. I did part of the seven day ceremony here, and texted him a message from his father.

My friend also contacted my teacher who sent along a shaman colleague to do the full ceremony and got exactly the same message.

This was not regarded as surprising in any way, because it’s all part of the service local people are used to from their shamans.

As well as clearing houses of accumulated negative energies, people regularly go to shamans to have their cars cleared in the same way. Indeed, I know at least a couple of shamans who specialised in this kind of work.

Shamans are generally expected to be omni-competent, though some shamans do not have the power to handle particularly severe illnesses, for example.

Although clients in the capital – Kyzyl – would come to one of the shaman clinics for treatment, if they knew there was a shaman in the neighbourhood they would knock on the door and ask if you could do something for them.

One weekend, I was visiting relatives of a friend whose aunt knew I was doing my apprenticeship. I was in a village where there were no local shamans. She asked me to clear the house for her – then the livestock in the yard. A neighbour heard the drumming, and popped by to ask if I could help her as her husband was an alcoholic and it was making life difficult. She later came back with a payment of a dozen and a half fresh eggs.

On another occasion, after I had completed my apprenticeship, I was back in Tuva and my teacher – Kungaa Tash-Ool Buu (pictured below) – asked me to help him on an out of town job.

We drove through the mountains to a yurta (round felt tent) where we were met by a woman boiling up a huge quantity of milk in a giant saucepan under some trees. 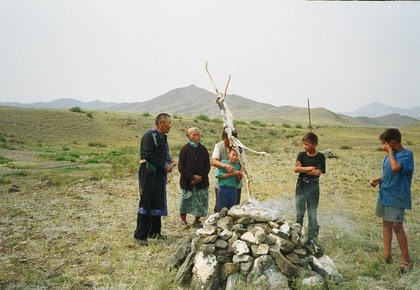 The year before, my teacher had constructed an ovaa – a ritual cairn – to protect the area where the family were living. We were there to charge it up. When we finished doing that, he then did a negative-energy clearing of all the people in the family.

Just before we left, our car was backed up to a fence, and we were each given a live sheep to take back to Kyzyl as payment.

I’ve seen shamans using divination – by stones, or by an esoteric form of astrology – and dispensing herbs too. And helping clients choose which new apartment they should move into.

Some shamans’ therapies which we may be more familiar with – like acupuncture, or external Chi Kung – were developed by Chinese shamans. In Tuva, these techniques are still plain and simple, and not codified in any way. In Siberian shamanism intuition is all-important.

It seems that here in the west, many alternative therapies are specialised and highly developed, and clients may have a hazy idea of what to expect of a shaman practicing in the UK.

It’s something which has been clouded by the hugely differing perceptions of what shamanism is.

For a start, the drumming is not done directly for the patient – it’s for the shaman. It assists the shaman in achieving an altered state, a light trance which opens up information, and which allows the shaman to manipulate energies.

The most common use of energies is pulling out negative energy and putting in positive energy, so underneath the more unfamiliar aspects of Siberian shamanism – like the drumming which usually starts all treatments – it’s relatively simple and straightforward.

Basically, Siberian shamanism uses many techniques developed over thousands of years yet which have a lot in common in their essence with methods now familiar to us in alternative medicine.

Back to – Shaman Services