Many strenuously resist the idea even when they feel they are being called to the vocation. For being a shaman is a challenging business.

It involves dealing with energies. Positive and negative energies. And if the shaman doesn’t get it right, he or she can suffer.

Until recently, Siberian shamans were also persecuted by the state. The shamans who taught me practiced in secret – one of them for 30 years.

In one Siberian republic at the beginning of the 1930s, there were 1000 shamans, and 5000 Buddhist lamas, but after the Stalinist purges of the thirties and forties there were none left – officially.

They were rounded up by the KGB, put into the Gulag work camps, or later,

thrown out of helicopters to die.

So when I travelled to Siberia for the first time in 1990, th 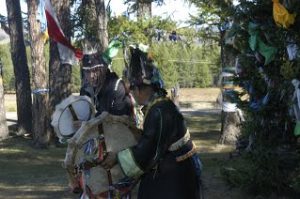 e official line was that there were no shamans left. It had all died out.

The truth was – it was all underground.

But little by little, as I kept returning to Siberia, things changed, and following a long series of co-incidences, I became an apprentice.

I travelled to Sakha – or Yakutia as it used to be known – in the north of Siberia. And to Lake Baikal, and to the Altai mountains. But it was in the tiny republic of Tuva that the shamans found me.

For a country the size of Wales, Tuva has an astonishingly rich mix of landscapes, wildlife and climates. There are lakes surrounded by swathes of virgin forest with reindeer, sable and bear.  Yaks, wolves and eagles live in the Sayan mountains in the north, and camels roam in the bleak southern deserts. Like the ochre steppe-lands, all these regions have remained largely untouched.

Tuva is the least Russified part of Russia.  Although farms were collectivised, much of traditional life remained, with nomadic families living in felt yurtas and herding sheep and cattle.

I went down to Samagaltai on the road to the border with Mongolia and met Kungaa Tash-ool Buu (pictured above and below) – a lama who had just opened a small wooden khram (temple) that day. 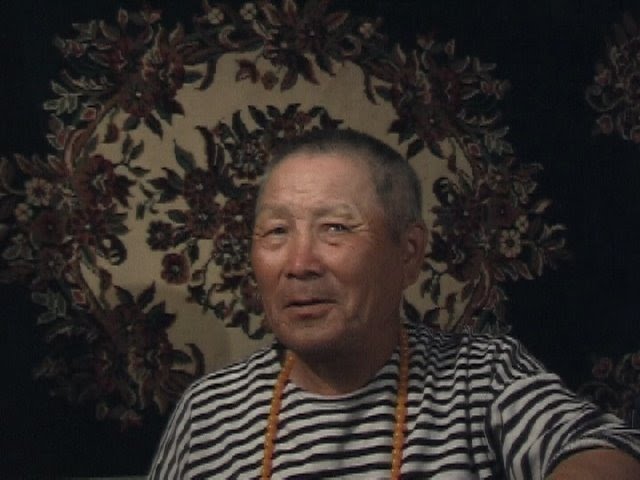 He told me his father was a shaman. Kungaa said that he was just a lama – but he had inherited the ability to tell someone’s future, and he went on to tell me some astonishingly accurate things about myself.

The next time I went back to Tuva, it was winter. It was minus 25 in town – and minus 35 down by the Mongolian border. Such a change from the summer, where it’s hotter than Italy.

Things had changed quickly after my first trip to Tuva. Shamans had begun to come out in public and had opened up a shamans-clinic, rather like a group practice of doctors, where people could go for different treatments – like chest complaints, protection for traveling or back problems.

I went to the shaman’s centre and talked to the shamans about their work.  One of the shamans looked at me for a while, gazing strongly into my eyes and said to me: “You could be a shaman.”

I was taken aback. She offered no explanation.

The next day I went south to meet Kungaa again.

And he said the same thing: “You can be a shaman.”

He refused to say anything else. And for the next few years this was his pattern of zen-like instruction.

But when I got back to London there was a letter waiting for me. It was from Kungaa. And there was a photo of him – not in his lama costume, but in his shaman’s costume. And he said that actually, he had been also a shaman for 30 years – in secret.

I kept going back to Tuva to get instruction as his apprentice  – I was given a dungur shaman’s drum. Kungaa told me things like: “You can heal people from a distance.” Then left me to get on with it.  And then he’d say: “You know, you can heal people with your hands.”

I was left to try and work things out for myself. Once I found myself studying external Chi Kung in London – although Kungaa hadn’t suggested it to me. And when I went back, I found that it was what shamans were doing in Tuva – except they didn’t know anything about Chi Kung.  I think they had been healing in this way even before Chi Kung was developed by Chinese shamans.

Eventually I felt ready to go back and complete the apprenticeship. I arrived in Kyzyl, the capital of Tuva and went to see an elderly academic authority on shamanism who’d befriended me.

I told him of some things I’d seen while shamanising in London. I gave him the name of someone I had seen healing a patient in a particular way.

And he said: “I know that shaman. And indeed that’s how he takes bad energy out of patients. He is in charge of the shaman’s centre.”

Later that morning, I was sent to the centre to begin studying with Kara-ool Dopshun-ool – the shaman I had seen while shamanising in London.  I spent each day at the centre, and in the evening I’d visit Kungaa for more intensive teaching.

I learned how to find and use white energy to heal people; how to recognise black energy in people and pull it out of them. I worked at a holy spring with two other senior shamans treating a young woman with epilepsy.

I was asked to purify a farmhouse – and the livestock. And finally, the people who lived there.

This kind of cleansing of negative energies from homes is one of the most frequent jobs for a Siberian shaman. 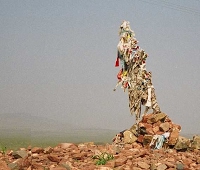 Shamanism is not a precise science or practice – each shaman has his or her own way of doing things. And many shamans have their own specialties – some shamans are particularly good at healing children, some have strong extra-sensory powers, some specialize in clearing out black energy.

But at the heart of it all is energy and manipulating energy – in order to be able to work, shamans often choose to go into a light trance. While in trance the shaman may see things and receive instructions on what to do for the patient – the shaman may see problems to do with blocked energy.   Then the shaman will work to clear the blockage or remove a cloud of negative energy.

The drum is used to help the shaman prepare and is not for the patient – it is not for playing music but is a shamanic instrument.

Although shamans will perform rituals, the important aspect is not the ritual itself but the intention – and moving energy. A shaman does not pretend to be able to heal everything.

The shaman believes that illnesses can be caused by an imbalance of spiritual energies like an influence of black energy for example. The shaman’s job in healing is to recognise the cause and deal with it.

Finally Kungaa took me to a spring in the mountains to complete my initiation and purified my drum and all the paraphernalia.

And the society of shamans of Tuva made me a member, allowing me to practice in their country.   And since qualifying I’ve gone back and worked at the centre run like a group practice where patients come to be treated by individual shamans, some of whom specialise in particular illnesses.

One of the most important things I learned from my colleagues in Tuva is their ethical position.

Although a fully-qualified shaman should be able to tackle a wide range of conditions, he or she shouldn’t claim to be able to heal everyone.

A woman shaman-colleague told me: “Sometimes people come to you as a last hope. It’s important to stay calm and, if you realise that you can’t help someone, simply tell them straight away. You mustn’t be upset about it.

“That’s my opinion – it’s impossible to master every situation. For me, a shaman’s life is struggle. It’s important to be honest.”

When I was struggling to find some of the answers in London before I went back to Tuva to complete my apprenticeship, I read a lot of books on shamanism, but Kungaa kept showing me many things I just hadn’t come across in the literature.

He used to laugh and say: “There’s a lot of stuff in books – but it’s not the real thing.”

Here is a short video of Kungaa conducting a kamlanie ritual

My other teacher is Kara-ool. He was head of the Dungur centre for shamans, then later headed up the Adyg Eeren centre in Kyzyl. 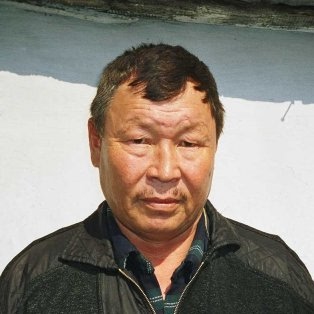 He has become the best-known shaman in Tuva.

Here he is in action in a video, below.

Back to – All Shaman Services